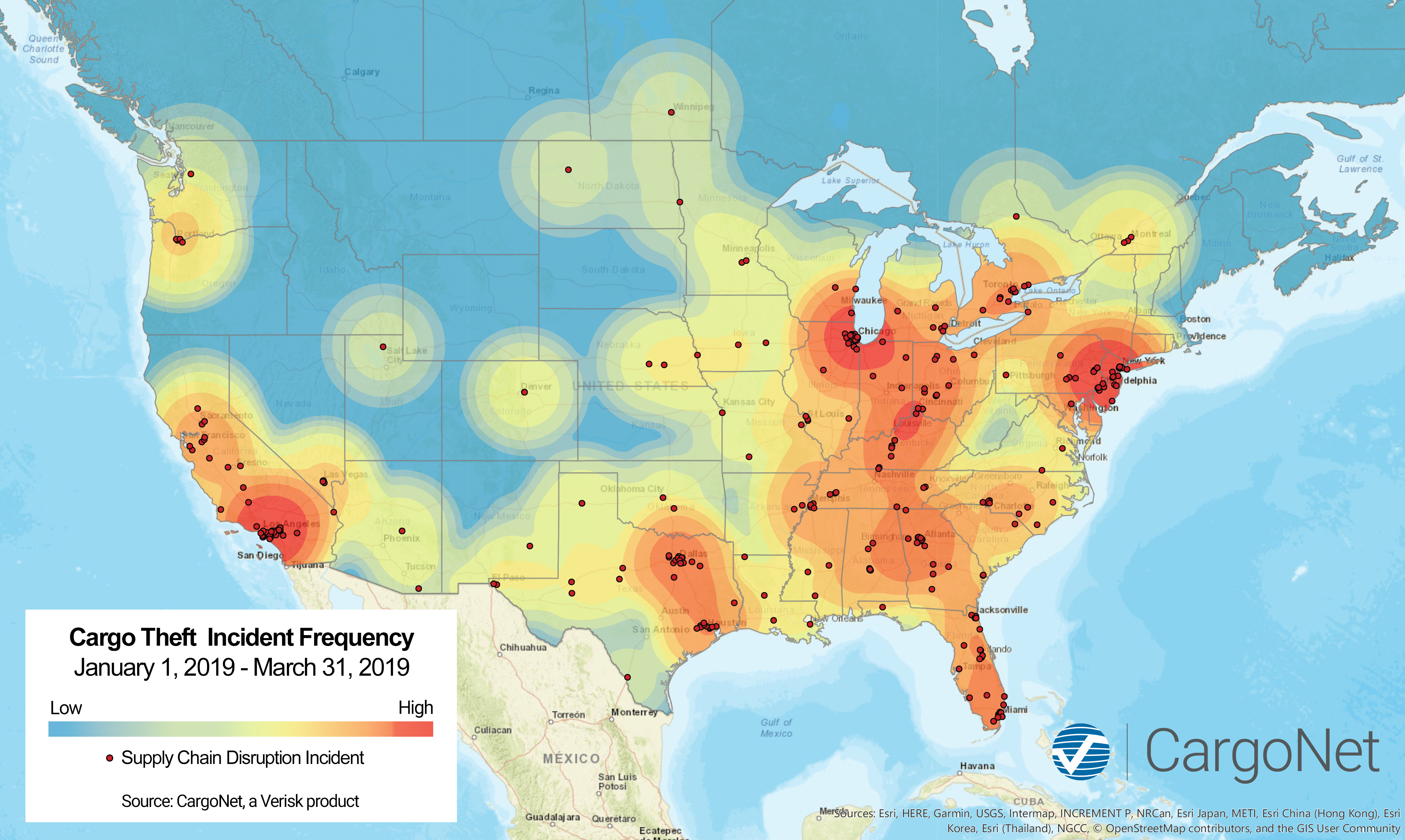 JERSEY CITY, N.J. — In the first quarter of 2019, CargoNet® recorded 330 supply chain risk intelligence events in the United States and Canada. Of those incidents, 52% involved a stolen vehicle; and 42% involved stolen cargo among several other kinds of events, such as identity theft, missing drivers, fictitious pickups, and other police intelligence matters. In total, CargoNet recorded 140 cargo thefts across the U.S. and Canada in first-quarter 2019, a 22% decrease from first-quarter 2018. The average cargo value per theft event was $145,772, for a total estimated loss of $12.8 million across the U.S. and Canada in this analysis period. CargoNet is a Verisk (Nasdaq:VRSK) business.
CargoNet’s analysts noted two important trends in the first quarter of 2019. First, analysts found that loaded trailer burglaries (or pilferages) should be viewed as a growing threat and, in some parts of the country, the preferred method of stealing cargo over full-truckload theft. CargoNet’s analysts also noted a resurgence in fictitious pickup activity after two years of dormancy. We believe these two trends will continue through the rest of the year.
Food and beverage remained the most stolen commodity category but continued to decrease year-over-year, dropping more than 22% from first-quarter 2018. Nonalcoholic beverages were the most stolen kind of food and beverage freight. Household cargo and electronics cargo were the second and third most stolen commodities, respectively. Tools, lawn care products, and major appliances were the most stolen household items, while televisions and computers were the most stolen electronics items.
California remains the top targeted state, at 32 reported cargo thefts in first-quarter 2019, even though thefts in the state were down nearly 44% from first-quarter 2018. Florida and Texas were a distant second and third place, with 17 cargo thefts in Florida and 16 in Texas. CargoNet continues to note a significant increase of cargo thefts in Alabama—due largely to an influx of pilferages in the Selma, Alabama, area.
For more information, contact:
Eboni Thomas
Edelman (for CargoNet)
212-642-7784
eboni.thomas@edelman.com