JERSEY CITY, N.J. December 16, 2022 — CargoNet® reports that supply chain theft activity is extremely elevated and believes it will continue into the holiday season as experienced cargo thieves will seek to exploit a target-rich environment of unattended trucks and closed warehouses. Theft and fraud complaints filed with CargoNet between August 1 and December 14 are up 27% year-over-year.  Complaints filed between December 1 and December 14 are up 40% year-over-year.

CargoNet examined theft data between December 23 and January 2 for the past 5 holiday seasons to help supply chain professionals mitigate theft this holiday. In this analysis, there were 176 incidents reported to CargoNet and the average cargo theft was valued at $116,030. The number of incidents increased progressively each year. Last holiday season, there were 42 incidents reported between December 23 and January 2.

Incidents were most common in Texas and California, tied at 18% of incidents in each state. Incidents were also common in other major cargo theft hotspots like Georgia, Florida, and Illinois, respectively. Thieves most often stole unattended vehicles and shipments parked at major retail parking lots and truck stops, though we note that incidents at fenced truck yards were a close third to these two categories.

Electronics commodities like televisions and computers were favored by cargo thieves in this analysis, but we do note that commodity preferences closely mimic consumer demand. Cost and scarcity of some food and beverage products like meat and seafood will make them attractive targets this holiday.  Cargo thieves also targeted shipments of tires, motor oil, and major appliances which remain attractive targets in present day.

This holiday season, we're extremely concerned about specific categories of freight that may be targeted through complex fraud and misdirection schemes that have exploded in popularity in California and are spreading to other states.

Cargo thieves have been misrepresenting themselves as legitimate truck drivers to logistics brokers and bidding on truckload shipments of solar panels, cryptocurrency mining equipment, motor oil, tires, appliances, and more. If their bid is accepted, the thieves will misdirect the shipment through a series of cross-dock warehouses and ultimately into their custody. Few shipments that have made it into their custody have been recovered and it can take the victims in the supply chain weeks to realize what has happened, as thieves will often produce fictitious proof of delivery documents before disappearing.

Logistics brokers can mitigate attacks by verifying the person they are tendering the shipment to is a legitimate employee of the motor carrier they claim to represent. Logistics brokers should also communicate the name of the driver and motor carrier to the shipper, so the shipper can verify before loading the shipment. Shippers should confirm the delivery address with the motor carrier before loading a shipment. Motor carriers should verify the legitimacy of any logistics brokers that offer to hire them to pickup a shipment and deliver it to a nearby cross-dock instead of the consignee address. Cross-dock warehouses - especially those in Southern and Central California - should very the legitimacy of new customers looking to store multiple truckloads of goods in their facility for a short time.

Know that thieves will seek to exploit the pre-Christmas rush to further these crimes. Cargo thieves know the best time to book a shipment is right before a holiday or towards the end of the day on a Thursday or Friday as logistics companies will be more eager to overlook discrepancies, skip compliance checks, and accept bids.

As always, CargoNet encourages victims to report any suspicious activity to law enforcement immediately and contact CargoNet at 888-595-2638 only after law enforcement has been notified and there are no immediate threats to life or property. Have a happy and safe holiday season! 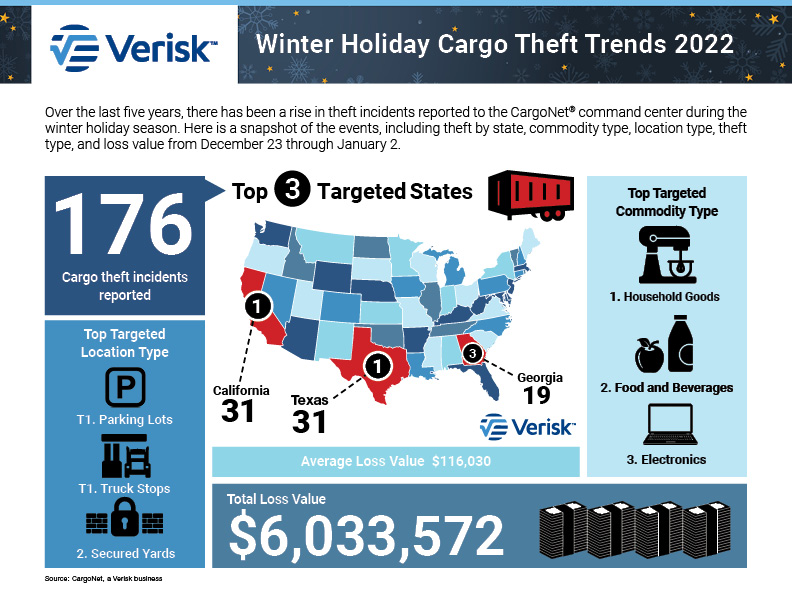 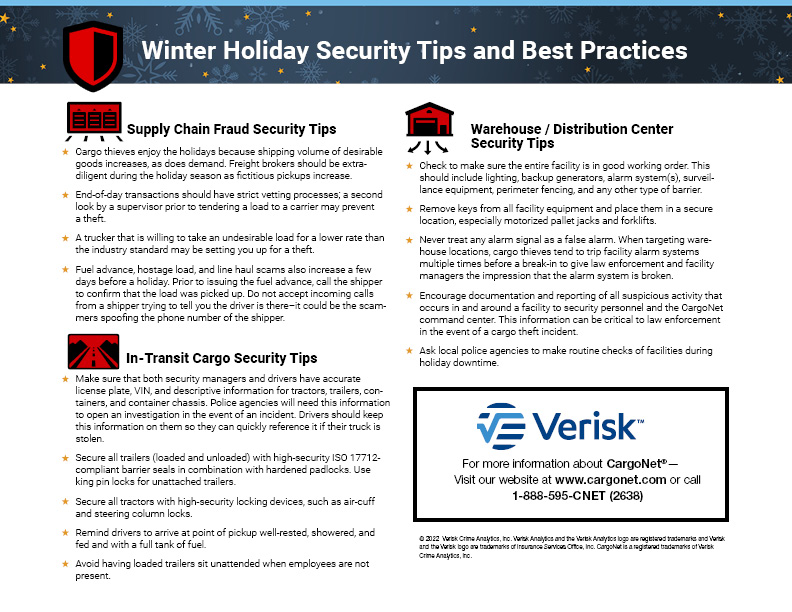