JERSEY CITY, N.J., November 16, 2022 - As we prepare for the upcoming Thanksgiving holiday, CargoNet cautions that holiday breaks create opportunities for cargo thieves to target unattended vehicles, shipments, and warehouses. CargoNet is tracking organized cargo theft groups operating in almost every region of the country that are carrying out sophisticated targeting operations to steal specific kinds of goods.

CargoNet's Command Center analyzed historical crime data from the Tuesday before Thanksgiving to the Monday after Thanksgiving for the past five years to help industry professionals mitigate theft risk. CargoNet recorded 118 theft events in this analysis period, with an average stolen shipment value of $183,891. Theft reports were most frequent the Friday after Thanksgiving.  Theft events were most common when the victim parked their property in large parking lots, like that of a big box retailer, and were most frequent in San Bernardino County, CA, Cook County, IL, Los Angeles County, CA and Fulton County, GA, respectively. Cargo thieves targeted a wide variety of goods in previous years, but especially targeted shipments of televisions, major appliances, vehicle tires, and alcoholic beverages.

There are several regional trends that CargoNet's Analysts are most concerned about this upcoming holiday.

Logistics brokers should be on high alert for identity fraud and cargo theft schemes, as use of these tactics have been rampant for shipments departing Southern California. We implore organizations that are tendering shipments over the internet to verify details of all transactions prior accepting a bid. Shippers should warn motor carriers of misdirection theft schemes and verify the intended delivery address with the driver prior to loading. Public cross-dock facilities operating in Southern California should be wary of new customers offering all-cash payment and promising lucrative future business.

Industry professionals can protect against trailer burglaries and theft of loaded trailers by arranging for same-day delivery of short-haul shipments, embedding covert tracking devices in shipments and on vehicles, and using high-security locks. Drivers should not leave their vehicles or shipments unattended in insecure locations like retail parking lots or truck stops, especially within 250 miles of pickup. If it is necessary to leave property unattended, CargoNet recommends someone check on it as frequently as possible. On average, it took about 1 day for a victim to notice their property had been stolen in this analysis, but this increased to over 2 days if the property was left unattended the day before Thanksgiving. Drivers should also be on the lookout for any vehicles that appear to be following them from the origin point.

*Footnote: Analysis period is defined as the Tuesday prior to Thanksgiving to Monday after Thanksgiving for 2017 through 2021. 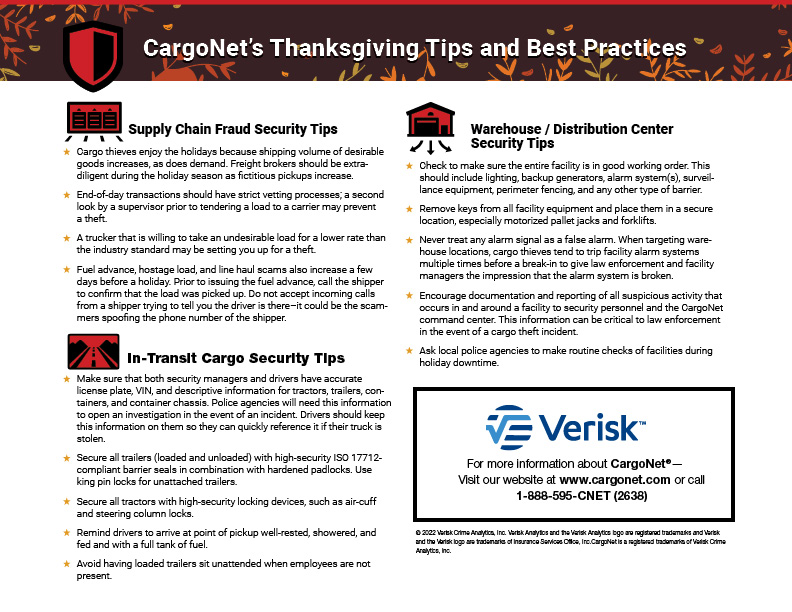