JERSEY CITY, N.J. — CargoNet® recorded 1,778 supply chain risk events across the United States and Canada in 2022, an increase of 15% from 2021.  Supply chain disruptions were one of the main concerns of the year because of their effect on inflation. Scarcity and cost drove illicit market demand for goods that were most affected like computer graphics cards and raw beef, poultry, and pork. Available capacity eased in the later months of 2022, but theft remained a prominent threat.
CargoNet's 2022 data indicates that events that involved theft of at least one heavy commercial vehicle such as a semi-truck or semi-trailer increased by 17% year-over-year, while events that involved theft of cargo increased by 20% year-over-year. Note that a single event record could involve theft of one or more vehicles or shipments. The average value of cargo stolen in an event was $214,104. CargoNet estimates that $223 million in cargo was stolen across all cargo theft events in 2022.
Increases in theft activity around major intermodal hubs were significant. California remained the top state for reported events in 2022 and theft in the state increased 41% year-over-year. Computer and green energy components were some of the most frequently stolen items of the year and California is a major logistics hub for these items. Theft in Georgia increased by 34% year-over-year, due in part to organized crime groups that took advantage of increased traffic to the Port of Savannah. Georgia shut down a state task force to investigate cargo theft in 2020. 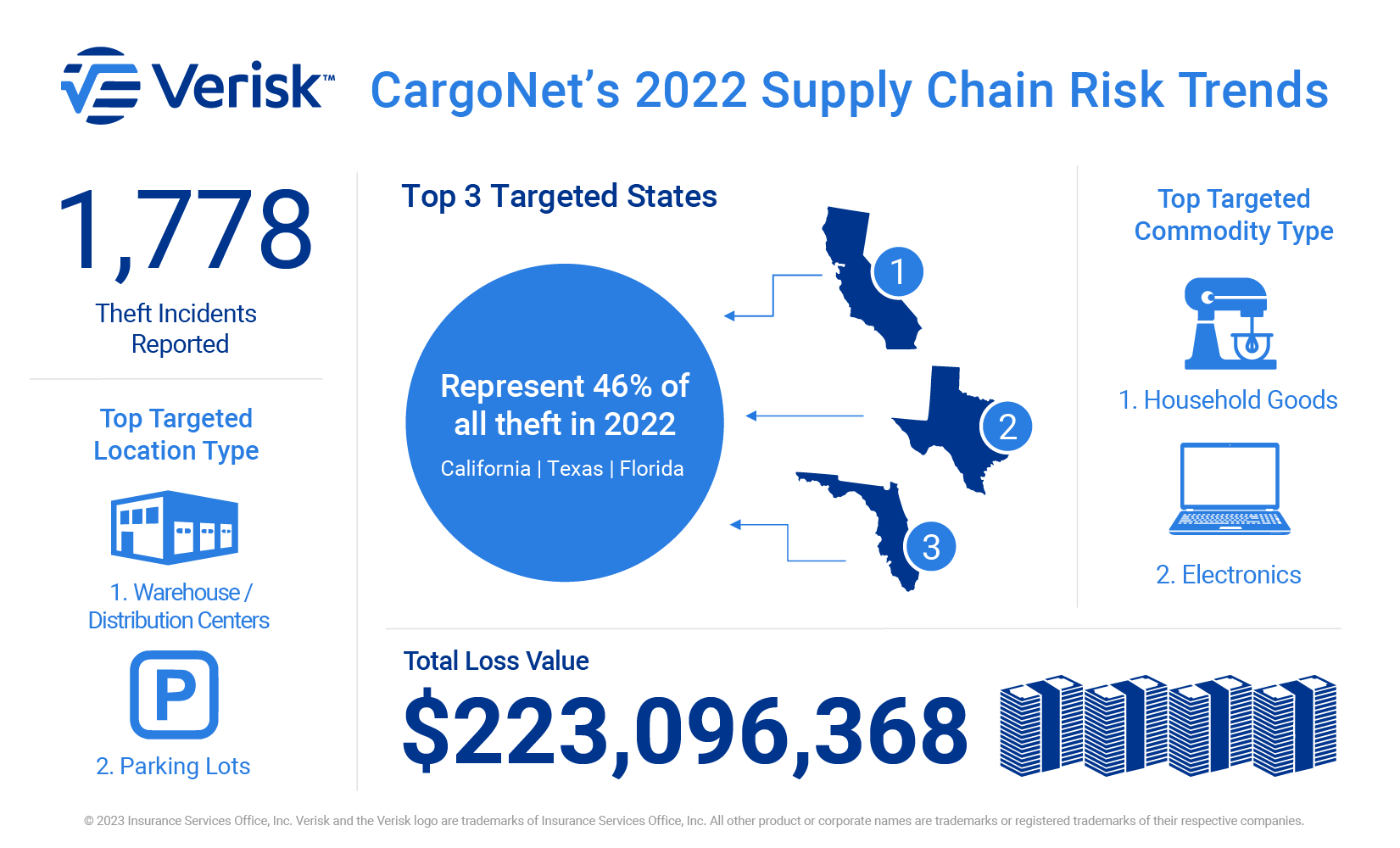 Household items were the most stolen commodity in 2022. This is a diverse category that includes appliances and furniture which often get targeted during long haul and final mile distribution. There was also a notable increase in theft of shipments of tools and toys. Household items were closely followed by electronics. Theft of computer electronics decreased by 37% from 2021, but we note theft of these products reached unprecedented highs in 2021 and theft was still elevated compared to baseline. Additionally, theft of televisions and other displays nearly doubled from 2021.
As we begin the new year, all industry members should take steps to mitigate fictitious cargo pickups, a blend of identity theft and cargo theft that can affect all parties in a supply chain. CargoNet recorded 96 more fictitious pickups in 2022 compared to the year prior, a 600% increase year-over-year. Most fictitious cargo pickups occurred in California (74% of total), but the crime is spreading across the country and CargoNet has recently received reports of similar fictitious pickups in Washington State, New Jersey, Pennsylvania, Illinois, Texas, and others. Shipments of solar modules, auto parts, and vehicle maintenance products like engine oil are most at risk, but the threat extends to most categories of goods.
This style of fictitious cargo pickup relies heavily on subcontracting the shipment to a legitimate motor carrier and having the shipment misdirected to another address. Logistics brokers and shippers can help prevent fictitious cargo pickups by verifying any bids on shipments with the motor carrier through their contact information on file with the FMCSA and verifying the name of the motor carrier and driver matches who the shipment was tendered to. Motor carriers should be wary of new customers that offer payment through peer-to-peer money transfer apps if their business would haul a blind shipment delivering to an address different from the bill of lading, especially if the address is a public warehouse or cross-dock in California.
CargoNet remains committed to our efforts to mitigate fictitious cargo pickups and assist law enforcement agencies investigating these crimes. Please report any suspicious activity to law enforcement immediately and contact CargoNet at 888-595-2638 only after law enforcement has been notified and there are no immediate threats to life or property.
For more information, contact: