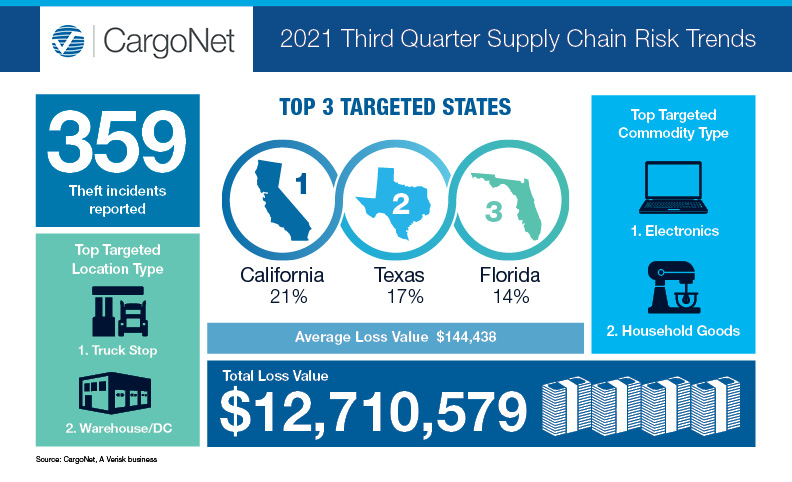 Reported theft dropped the most in the Northeast - 74 percent year-over-year. In part, this is due to a reduction in full truckload cargo theft in the New York metropolitan area and enforcement action taken against an interstate trailer burglary group that frequented truck stops on the I-81 corridor in Pennsylvania.  Theft reports in the Southwest decreased 32 percent year-over-year, but this was after a staggering 246 percent year-over-year increase in third quarter of 2020. Crime in Texas was responsible for the fluctuations and we attribute the decrease in crime to police actions against organized crime rings based in Illinois and Texas.

Cargo thieves continued to show a strong preference for computer electronics shipments and nearly 70 percent of these thefts in the third quarter of 2021 occurred in California. In contrast, household products thefts dropped 63 percent largely because CargoNet recorded fewer pilferages of these products.

Entering into the final quarter of 2021, CargoNet expects that theft activity will remain elevated. We are concerned about targeting of computer electronics shipments shipping from California, as well as a breakout of full truckload cargo thefts spreading across the eastern half of the United States. CargoNet continues to track these events and work with law enforcement agencies across the country to share information and recover stolen vehicles and goods.