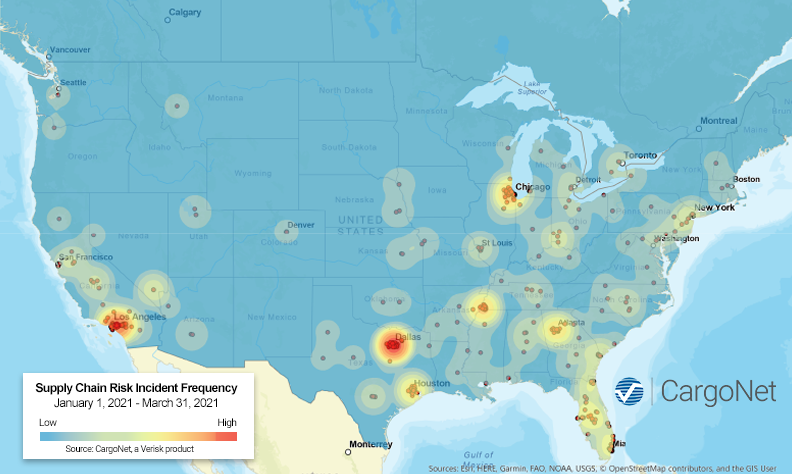 JERSEY CITY, N.J. — CargoNet® reports similar levels of supply chain crime activity as first-quarter 2020, despite changes to targeted commodities and tactics used by cargo thieves. Overall, reports of industry-related fraud schemes increased while outright theft of trucking vehicles or cargo decreased slightly.
CargoNet recorded 289 thefts or attempted thefts in the supply chain in the first-quarter of 2021. This is a decrease from first-quarter 2020 that was mostly felt in fewer theft schemes targeting truckload copper shippers in Illinois, trailer burglaries in Illinois, Pennsylvania, and Georgia, and fewer full-truckload thefts in Pennsylvania. In total, each cargo theft event in first-quarter 2021 was worth an average of $142,574.
Theft activity in the first-quarter 2021 was highest in Texas, California, and Florida and all three states reported significant increases in theft. Theft activity in Florida fell in February, but spiked significantly in March 2021. This paved the way for a 26% year-over-year increase in theft activity in the state. Historically, theft was most frequent around Miami, but recently has shifted to truck stops and retail parking lots in the Jacksonville, Tampa, and Orlando metropolitan areas.
For California and Texas, CargoNet's Analysts have worked to prevent victimization by releasing several warnings about commodities and locations of concern to CargoNet members so they can harden their supply chains to theft. We continue to monitor crime patterns in both states - specifically frequent attacks on truckload computer electronics shippers in Northern and Southern California. Pilferage and full-truckload theft of computer electronics shipments in California have increased 88% year-over-year and we expect thefts to continue until supply can meet market demands.
For more information, contact: